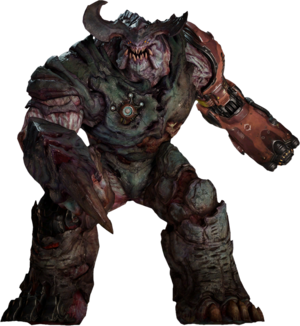 The cyberdemon.
This article is about the monster in Doom (2016). For other games, see:

The cyberdemon is a boss monster in Doom (2016). It was the first monster to be revealed by id Software in publisher Bethesda's E3 2014 showcase, in the form of a one minute video of the monster powering up for battle while shrouded in smoke and shadows. Its identity as the cyberdemon was later confirmed after the E3 2015 public reveal, though Doom community members widely speculated this identity correctly beforehand, based on the monster's size, shape, and some sound design similarities to the same monster in Doom 3.

The cyberdemon appears as a grayish-green-colored, towering cybernetic demon with two antler-like horns, four small oval orange eyes set in two far-apart groups on its face, and a mouth full of sharp teeth constantly clenched into an evil grimace similar to the one displayed by the original cyberdemon. Like its classic incarnation, its left arm and right leg are replaced to different degrees with cybernetic prostheses, the former being replaced with a powerful combination rocket launcher and laser weapon. Various other parts of the creature also appear to fuse human technology with demon flesh, including a plate embedded into the creature's chest which glows with blue light and contains an Argent accumulator. When the monster roars, sparks of fire stream from its mouth.

The cyberdemon is fought as a two-stage boss in the Lazarus Labs level. It is extremely, deceptively fast for its size, and has multiple attacks: it can fire individual rockets, it can release a volley of rockets which go up into the air and then descend toward a set of circular landing spots which are marked on the floor, and it can charge a massive blast from its laser gun, which will start out as a set of thin non-damaging lasers which it keeps tracking ahead of the vector on which it will fire, and then widens into the damaging blast where it stops.

After its first health bar is depleted, the cyberdemon will become staggered and the Argent accumulator can be pulled from its chest; This will cause the player and the cyberdemon to both teleport to Hell. The cyberdemon's health will replenish, however, and it will gain yet more speed and a new attack: it can now spread fans of deadly energy from a blade-like projection that will appear in its right hand. These waves will speed forward toward the player and must either be ducked beneath or jumped over depending on their altitude. The player will initially be trapped in a narrow corridor with the cyberdemon and must skillfully dodge several of these waves in succession. Afterward, combat will resume mostly as before.

The cyberdemon can be stunned by shots from the BFG-9000, making it a critical weapon in the fight. Any other weapons will deal normal damage and cause the cyberdemon to drop ammunition. Simple strafing will suffice against its normal rockets, but when an aerial rocket spread is fired, the player must quickly move out of the red danger zones which start to appear on the floor to avoid each rocket's blast radius. When the cyberdemon charges its laser, the player needs to out-predict the monster, as it will continue to try to aim the weapon where it thinks the player will be when it fires it, rather than directly at the player's current location. There are only a few seconds during which to make this decision, since once the laser is fully charged it will become instantly fatal if it hits.

A cyberdemon also appears on the re-creation of Doom's E2M8: Tower of Babel which appears as unlockable bonus content. This cyberdemon behaves mostly like its classic counterpart, firing rockets at the marine constantly while he is in sight. Note that this cyberdemon does not fire rockets in sets of three, nor does it stop moving to fire, making it significantly faster than the original. This seems to have been added for fun as an afterthought, since the cyberdemon is not well-animated while moving around the area.

The cyberdemon was the most significant and prized creation of the UAC's Lazarus Project, brought back to life and enhanced with technology in an effort known as the Cyberdemon Reanimation Project. A manned expedition to the Titan's Realm, designated MTC 2148/177, discovered the petrified remains of a Baalgar demon, an ancient shadow lord previously known only from mention of a battle in which it fell in the Corrax tablets, found in the UAC automated survey of 2143.

The project to revive the Baalgar demon began as attempts to merely weld the creature's body back together for educational and "inspirational" display purposes, but it was found that application of Argent plasma to the petrified remains reanimated the long-dead tissue. After this, the Lazarus researchers became obsessed with reviving and enhancing the demon for use as a bioweapon, integrating an Argent accumulator into its chest with direct control from the brain as a near unlimited, on-demand power supply, and grafting a powerful arm cannon in place of the missing left arm.

Once the cyberdemon was complete and the Argent accumulator activated, however, the demon immediately turned the device to full power, reviving neural and circulatory functions, and began attacking the researchers. One Follower Jacobson sacrificed himself by luring the cyberdemon into Holding Pen 6, where it was permanently detained. Due to an inability to subdue the demon again, it was put into a permanent state of suspended animation, and only reawoke when Olivia Pierce unleashed the Hell wave from the Lazarus Labs. The UAC Report File that covers this incident suggests that the cyberdemon's action was influenced by a "mastermind" that governs the will of any creature demon borne, hinting at the Spider Mastermind's existence and involvement.

Doom VFR establishes that the UAC had built two cyberdemons, one being referred to as a prototype. This prototype was somehow lost within Hell, and is eventually battled by Dr. Peters in order to attain its Argent accumulator for use in shutting down the Hell portal that has formed at the UAC Mars Base.

In the E3 2015 reveal, the cyberdemon appears at the very end of the video in an after-credits stinger sequence, dropping or teleporting in unexpectedly behind the player inside a narrow corridor. The cyberdemon is seen to begin leveling its massive arm cannon at the player and charging up for a shot, as the player brings out the BFG in response and begins likewise charging it up. A 4K resolution screenshot released after the conference showed the cyberdemon in the midst of a melee with other monsters somewhere in Hell, leading to speculation that it would be a recurring major enemy rather than a boss. This turned out to not be the case, despite multiple such screenshots being shown off before the game's release.