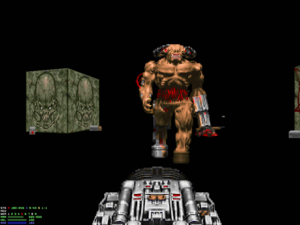 The cyberdemon is the first, and perhaps the most iconic, cybernetic monster to appear in the Doom series.

Cybernetics are a re-occurring theme in the Doom series of games and have appeared in virtually all entries in the series. Most commonly, cybernetics occur in the form of mechanized demons with various weapons grafted onto their bodies and controlled through neural interfaces. This article explores the phenomenon of cybernetics in Doom and serves as a list of all occurrences by sub-series.

In the Classic Doom games (Doom, Doom II, Final Doom, Doom 64, and their add-ons and expansions), it is implied by the game's instruction manuals, official guides, and other material that the cybernetic demons in the game came to exist via Hell's rapid adoption of human technology stolen from the lost Deimos moon base.

Doom 3, despite its extensive lore offered through PDAs and video disks, offers no in-game justification for the existence of cybernetic demons. However, they occur extensively in the game and in its expansion, Resurrection of Evil, even more so than in the classic series.

In Doom (2016), the UAC is directly responsible for the development of cybernetic demons, as an entire division was set up on Mars under Dr. Olivia Pierce to undertake this work in the top-secret Lazarus Labs, justified as a weapons development program.

In Doom (2016) and Doom Eternal, Dr. Samuel Hayden, the head of the UAC Mars Base facility and inventor of the process for the extraction of Argent energy from Hell, is an almost completely synthetic cyborg. Doom (2016) states that the remaining healthy portions of his brain were integrated into a powerful cybernetic body after he developed brain cancer. A similar process of cybernetic transference is later repeated on Dr. Abraham Peters in Doom VFR, via which his consciousness is transferred directly into the UAC base's systems, from which he can control a totally synthetic body.

In Doom Eternal, the entire species of the Maykrs, angel-like beings from the realm of Urdak, are integrated with what appear to be cybernetic suits of armor. Without their suits, a situation that can only be observed via an inert Khan Maykr in Urdak, the Maykrs display some traits similar to those of the grey aliens of popular culture, including long limbs, enlarged brains, and grayish-pink skin.