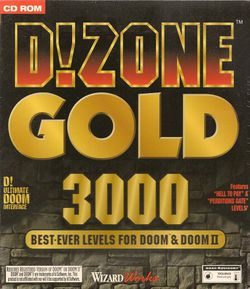 D!ZONE Gold, the most expansive entry in the series.

D!ZONE was a series of commercially distributed floppy disk and CD-ROM Doom level compilations produced from 1994 to 1996 by WizardWorks, Inc., a shareware and low-budget software distributor. The discs contain WADs and utilities collected from the Internet for Doom, Doom II, and other related games. These products were popular in the early- to mid-1990s when household Internet access was slower and not as common as today.

There were several entries in the D!ZONE CD series, each one containing an increasing number of files. These included:

Some products were also released on 3.5" floppy disks with a more limited selection of levels. The original D!ZONE release is an example, which included 75 levels on two floppies.

All of the D!ZONE series discs included the newest version of the D! frontend (originally known as the Doom/Master shell), which was developed by Simply Silly Software and sold to WizardWorks for inclusion on the discs. The D! frontend was highly polished and functional: it could randomize levels, recombine and resolve conflicting resources from any number of WAD files to create one new WAD, connect and manage network games, convert levels between Doom, Doom II, and in later versions, Heretic, Hexen and other games.

The D! frontend is a Borland Turbo Pascal 7.0 program, and thus it suffers from a well-known problem on machines with CPUs faster than 233 MHz. An error in a delay timer initialization routine causes the message "Runtime Error 200" to appear and aborts the program. This can be repaired with a widely available patch, however. Another solution was to slow down the CPU using special software. Running it in DOSBox can ease the issue too.

The D!ZONE series, along with other more generic Doom level discs, was controversial due to a number of its aspects.

First was the fact that, possibly in violation of id Software's EULA and Data Utility Licenses, user add-ons and editor utilities were being used to promote the sale of a commercial product. This immediately earned the ire of many authors, some of whose works explicitly denied the right to be distributed on CD but were included anyway. The discs do include text files for levels that originally had them, and these can be viewed in the included frontend, but WizardWorks' copyright notices do not seem to exclude the WADs on the discs and thus seem to attempt to exert rights over others' properties.

The number of levels on each disc is in some cases rounded up, or counts many levels twice because they have been provided in both a Doom and Doom II compatible form. The boxes of later editions of the products included "simulated screenshots" which made it appear to less experienced users that use of D!ZONE would provide significant graphic and gameplay enhancements, or that new total conversions were included on the discs. Small print on the back of the boxes disclaimed this, but excited players were unlikely to notice it.

It is likely that this change was prompted by a preliminary injunction granted against shovelware publisher Microstar by a California court in 1996 in a lawsuit against game publisher Formgen, in which it was alleged that use of game screenshots for illustrative purposes on unauthorized commercial add-ons did not fall under the umbrella of fair use. Publisher Formgen eventually won this case on appeal, but not until two years later.[1]

Many of the levels on the discs are of extremely poor quality, and some will even crash vanilla Doom upon loading or during play. Additionally, some of the Doom II levels simply seem to be Doom levels converted to Doom II by randomly changing some monsters and weapons into new ones, which leads to terribly unbalanced gameplay even in the better maps.

D!ZONE Gold included demos of the partial conversions Hell to Pay and Perdition's Gate, created by Wraith Corporation. These modifications were also allegedly in violation of the Doom EULA and Data Utility Licenses, which forbade commercial profit from Doom modifications without id Software's permission.

WizardWorks has created other products in their "!ZONE" line: H!ZONE for Heretic and Hexen, Q!ZONE for Quake and Duke!ZONE for Duke Nukem 3D. Non-FPS releases included S!ZONE for SimCity 2000, F!ZONE for Fury3, and W!ZONE for Warcraft II.