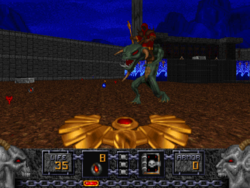 D'Sparil on his chaos serpent.

D'Sparil is the main villain and final boss of Heretic, and is the boss of Episode 3: The Dome of D'Sparil. He is the first and the youngest of the trio of Serpent Riders, relying on cunning and deception to initially gain dominance of Parthoris, the world of Heretic. He declared the supernatural race of the Sidhe to be forever hunted as heretics to their new Order. The Raven sequel, Heretic II, begins with D'Sparil's death and shows D'Sparil cursing Corvus. 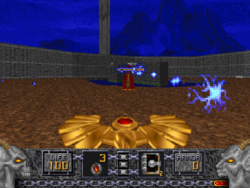 Player confronting D'Sparil without his serpent, narrowly dodging one of D'Sparil's bolts. 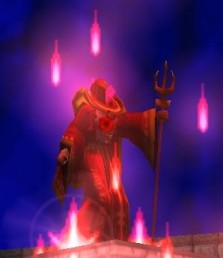 D'Sparil is initially seated upon a green chaos serpent, later appearing in Hexen as a standalone enemy. The serpent will belch fireballs at the player - initially only one fireball is launched at a time, but once the serpent falls below half health it will belch a line of three fireballs in a spread pattern. The serpent can also gain a burst of speed and charge at the player when stunned by attacks. Like the iron lich and the maulotaur, D'Sparil is immune to the effects of the Morph Ovum and cannot be instantly killed by the Firemace under the influence of the Tome of Power. Like the maulotaur, D'Sparil also has 50% damage resistance against the powered-up Hellstaff's rain. He also takes no splash damage from explosives.

When the serpent dies, D'Sparil will electrify and rise from the ground, and start attacking the player directly. His abilities are a mix of offensive and defensive tactics, one being to fire a blue, trailing bolt of electricity for extreme damage to unarmored players. He can also shoot a pair of purple rings which turn into disciples, and teleport himself to one of the six raised platforms in the area. As D'Sparil takes more damage, he will teleport more often; D'Sparil will also frequently teleport when he is hit by a Phoenix Rod missile or powered-up Hellstaff rain (the game code does a specific check for these weapons hitting him).

D'Sparil can be hurt by stray missiles from his disciples, however, he will not retaliate against them in infighting when dismounted. His chaos serpent has no such qualms, however.

When D'Sparil finally dies, he explodes into a pile of bones in a burst of electrical energy, and all other enemies on the level will instantly die too.

The demonic incantations of D'Sparil are actual phrases recorded backwards: