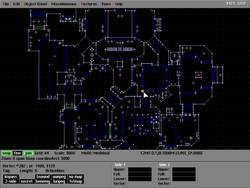 Doom Construction Kit (abbreviated as DCK) is a sector-based DOS level editor created by Ben Morris. It is similar to DEU in many respects; for example, DCK is mode-based.

Versions of DCK before v2.2f were free to download; versions after this must be bought to be used. However, older versions can still be downloaded and have the same features as later versions.