DLight is a lightmap compilation utility by Samuel Villarreal (Kaiser). It allows lightmaps and shadows to be baked in a WAD file. Unlike dynamic light however, baked lights and shadows generated by DLight are static, but they can support surface based area lights.

DLight was worked on from 2013 to 2014. The utility was created to generate lightmaps for Doom64 EX and Strife: Veteran Edition. It is designed to be used with maps that are built with GL nodes. Several new map lumps containing lightmap data are added after compiling. If data exist in the GL_PVS lump as used in glVIS, then it will utilize it to further speed up compile time.

Currently, only Strife: Veteran Edition and Doom64 EX uses lightmaps. Other source ports will ignore these special lumps generated by DLight, though the lightmap data can be processed by any port supporting GL nodes. 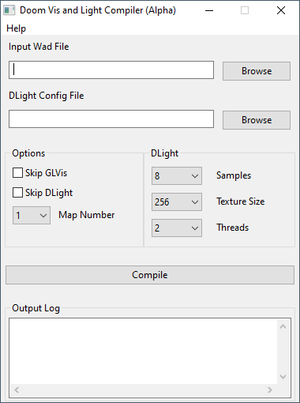 The opening screen of DLightGUI, showcasing the settings that can be modified before compilation.

DLight is available as a command-line program, but can also be used with a GUI. Known as DLightGUI, it is capable of baking lightmaps as well as utilizing GL_PVS data by glVIS. DLightGUI was created in 2014.

DLight (and thus DLightGUI) pose several restrictions, some of which are inherent on using an offline lightmap renderer:

Before building lightmaps, the wad file must first be pre-compiled with GL nodes using glBSP. Optionally, PVS data can be built using glVIS which can help speed up compile time. The input for DLight is as follows:

As of version 2.0, DLight can only compile one map at a time so the -map option is required.

DLight requires a .cfg configuration file to function. These files follow a specification which you can find below:

DLight generates new lumps that contain the lightmap data. A port needs to have support for these lumps in order to recognize this data. The new lumps are as follows: