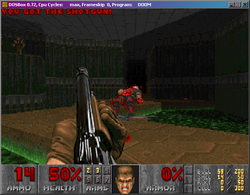 DOSBox is an open source multi-platform emulator designed to allow MS-DOS programs to be used on modern operating systems. Doom, Heretic, Hexen and other Doom engine games will run under DOSBox, although a relatively up-to-date computer is required for emulation at a playable speed. Earlier versions had some issues running Doom engines, but recent ones have greatly improved the performance, taking advantage of the power of today's systems and the ability to perform dynamic binary translation.

After DOS and Windows 9x became outdated and before DOSBox became fully capable of running Doom engines themselves, many players on systems without full DOS support were able to run Doom-engine games properly only by using a port released for or by id Software (or an equivalent, for Raven Software games), or one of the various source ports released by the fan community.

DOSBox is currently being bundled with Doom engine games through Valve's content delivery system, Steam. There were initial licensing issues, however, as id Software and Valve surprisingly neglected to comply with the license of DOSBox, which requires the source code to be distributed along with the binaries.