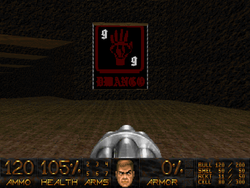 DWANGO9 was planned to be the 9th entry in the DWANGO series of deathmatch WADs, but never came to fruition.

For many years, this caused confusion among fans of the DWANGO series. Falconer, a former DWANGO moderator, had long maintained that no such WAD existed on his RareFiles site, however no explanation was given as to why, leading some to doubt this claim.

Further adding to the confusion, a "fake" DWANGO9 was compiled in 2004 by ZDaemon user Da_maniaC.

In September 2020, Doomworld user Shockwav3 started a thread to further investigate whether or not a true DWANGO9 had ever existed. When searching through an archive of old DWANGO files posted by former moderator HDrambo, he discovered a file called DWANGO!.WAD, which had DWANGO9 textures present in two different maps, strongly hinting that the WAD had existed at some point.

In October of 2021, former DWANGO moderator Voyager7 got in touch with Doomworld user Doomkid after a watching a video he had created on the topic of DWANGO9. Shortly thereafter, Voyager7 posted in the Doomworld Forum topic discussing DWANGO9, confirming that DWANGO9 had never been finished, and that the files "DWANGO!.WAD" and "BLUDBATH.WAD" were both originally contenders for the DWANGO9 title. Voyager7 speculates that, as the Dallas DWANGO server had already created and published DWANGO10, it made little sense to release DWANGO9 later on, resulting in him renaming the WADs he had initially planned to be DWANGO9, leaving a permanent gap in the series.