Dante's Gate is a single-level PWAD designed by John "Dr. Sleep" Anderson. In an era when level editing tools were fairly primitive, it distinguished itself by a strong emphasis on theme and mood, as well as by technical soundness. It is now considered an all-time classic.

At least five versions of the map are widely available:

The first three WADs replace E1M1; the other two replace MAP02. The level appeared in Maximum Doom as DANTE2.WAD, DANTE21.WAD, and DANTES2.WAD. 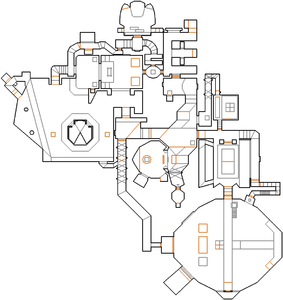 Map of Dante's Gate v2.5
Letters in italics refer to marked spots on the map. Sector, thing, and linedef numbers in boldface are secrets which count toward the end-of-level tally.

This map has an expansive layout and a certain degree of complexity, however, most of the areas it presents are optional, and the main route to find the exit of the map is quite simple. The only key you need is the yellow key.

You start the map in a small area with some former humans in front of you. Eliminate them and pick the shotgun. Follow the straight path. You will reach a midpoint on the map. On the left side, to the west, is a door. Enter the area and take a right turn. Enter through the two pillars into the light hall, it appears to be a disco. Follow the path and you will reach the yellow key area. Be careful in this area, as there are a lot of enemies of all kinds guarding the place. The key is in a small room at the back. Press the lion-shaped switch and two doors will open side by side. Inside is the key protected by a baron of Hell and two former sergeants. Once you pick it up, you can go back the same way.

Now simply go to the middle of the map again, and you will see the exit clearly marked on the south side. Open the door, kill the revenant guardian and press the switch to finish the map.

The west side of the map is an optional area with a lot of enemies and a BFG900 in the central structure. To reach it, go to the west from the midpoint of the map. You will clearly see a soulsphere floating over an edge. Press the lift in front of it and you will enter inside the area, guarded by a multitude of enemies.

On the north side of the map, right behind the hall of lights, there is a door that leads you to an optional marble room (tagged as a secret), where you can find a blue key and invulnerability powerup.

The records for the original map at the Doom Speed Demo Archive are:

Version 1.666 of this map was created to accommodate an obscure engine bug in Doom 1.666, which affected floor triggers tagged to multiple sectors.

The following additional releases of Dante's Gate have been reported:

In the readme file for version 2.5, Dr. Sleep lists no fewer than eleven editing tools (and two image processing programs) as having "had a significant effect" on the WAD.