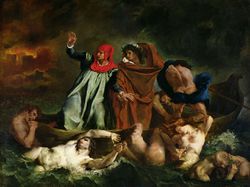 A leaden, smoky mist and the blazing city of Dis form the backdrop against which the poet Dante endures a fearful crossing of the River Styx with his guide Virgil, as they plough through waters heaving with tormented souls.

Dante Alighieri, or simply Dante, born c. 1265 in Florence, was an influential Italian poet who helped cement the standard Italian language. He is well known for his Divine Comedy, an epic poem narrating Dante's progress through hell, purgatory, and heaven. Doom itself shows some elements that are evidently taken from that work, such as the names of the third episode, Inferno, which is the name for the first part of the Divine Comedy, which takes place in hell, as well as a couple of the levels, Limbo and especially Dis, named after parts of hell as appearing in Dante's Inferno. Additionally, much of the texturing used in the hellish levels mimics some of the many descriptive passages of hellish locales found in the poet's work, which include rivers of blood or dry and fiery landscapes.

In Doom (2016), a reference to Inferno occurs at least once during one of the Slayer's Testaments, wherein the unknown dark lord of the fourth age of Hell lays out the history of the Doom Slayer. It is stated, "He set forth without pity upon the beasts of the nine circles." The concept of there being nine circles of Hell matches its layout as conceived by Dante. The name of the multiplayer level Empyrian may also be derived from the name for the tenth and final area of Heaven in Paradiso, the Empyrean.

The Divine Comedy has also been used or referred to by some level designers in the fan community, notably John Anderson (Dr. Sleep), who has released a series of levels named after and roughly inspired by the work, some of which are part of The Ultimate Doom and the Master Levels for Doom II, published by id Software.