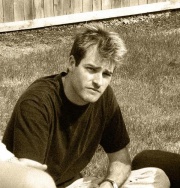 Dario Casali (born July 28, 1974, 47 years old) is a game designer best known in the Doom community for his contributions to Final Doom. During the 1990s he went by online aliases Punisher and Number 6.

While working on Memento Mori with his brother Milo, Dario met several members of TeamTNT, and eventually joined the group. He created two levels and co-authored another for TNT: Evilution, then designed half of the levels in The Plutonia Experiment. He has not worked with TeamTNT since Final Doom was published.

In 1997 he moved onto mapping for Quake, releasing single player episode Prodigy Special Edition along with five DCDM deathmatch levels. This modding experience lead Dario to getting hired as a level designer on Half-Life. Over two decades later, he still works at Valve under an "expert" role.[1]

In October 2021, he began sharing Let's Play videos of his Doom WADs and the community-made sequel Plutonia 2 on his YouTube channel.[2]

Dario and his brother Milo are the sons of Love Is... cartoonist Kim Casali.