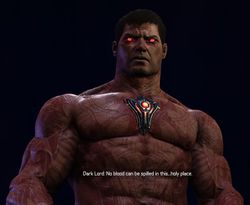 The Nameless One, also called Davoth, the Dark Lord and the Lord of the Fourth Age, is the ruler of Hell. He first occurs in Doom (2016) in the form of a demonic voice, and is first seen at the end of The Ancient Gods, Part One when he is forced to assume physical form and shown to be almost identical in appearance to the Doom Slayer.

Originally believed to be a creation of the Father, it was revealed in The Ancient Gods, Part Two that the Nameless One was the first being and creator of the Father, the Maykrs and the Slayer. His lieutenants are the Archdemons, who enforce his will unquestioningly.

The Nameless One originated as Davoth, ruler of the realm of Jekkad which preceded all other worlds. Although Jekkad was considered a paradise, Davoth sought to grant his people the gift of immortality as he was Jekkad's only immortal inhabitant; when his own efforts failed, Davoth created the Maykrs and the Father to devise a solution as their machine minds could work on the problem in unison. Although the Maykrs eventually succeeded, they deemed the knowledge too dangerous to share with Davoth as they had concluded that he would eventually become a threat to all of existence. The Maykrs worked together to seal Davoth and Jekkad away, then rewrote their history to portray the Father as their creator and Davoth as his wayward servant. Angered by this perceived betrayal, Davoth was consumed by vengeance and gradually warped into the Nameless One; in turn, Jekkad became a realm of chaos and evil that in time would come to be known as Hell.

In time, the Nameless One and his legions of demons managed to reach into other worlds and conquer them. As the conquest continued, the Father confronted the Nameless One and tore out his life sphere, preventing him from taking a physical form. The Father was reluctant to completely destroy his creator and instead had the life sphere stored in Ingmore's Sanctum high above the Blood Swamps; he then had his own life sphere stored alongside it. Although the Nameless One could not lead his armies in person, he continued to command them through dark whispers and was able to influence the minds of others, particularly those who were susceptible to corruption. This power allowed the Nameless One to initiate a plot to destroy those who had betrayed him, using a weapon that they themselves would create.

At some point after Hell's alliance with the Maykrs began, the Nameless One planted the prophecy of a "chosen one" in the Khan Maykr's mind - an unknown being who would appear among the Night Sentinels and rise to threaten her rule. Eager to destroy this perceived threat, the Khan directed the construction of the Divinity Machine, unknowingly using a fragment of the Nameless One which had been stored by the Father in the coffins of Urdak, in hopes that the machine would identify the chosen one before they became a threat. When Taras Nabad came under siege, the Nameless One planted visions and seditious thoughts in Samur Maykr's mind to convince him that the Khan was leading her people to ruin. Unknowingly compelled by the Nameless One, Samur brought the Outlander, a powerful warrior who had mysteriously appeared on Argent D'Nur and quickly worked his way up the ranks of the Night Sentinels, to the Divinity Machine, reversing its polarity to empower the stranger and turn him into what would become the Doom Slayer.

Prior to the events of Doom (2016), the voice of the Nameless One contacted Olivia Pierce and offered to ease her constant pain in exchange for her assistance in opening a portal to Hell on Mars. During the game, the same voice is heard threatening her over her failure to keep the Slayer from being reawakened, and repeatedly urges the demons to oppose the Slayer during his excursions into Hell.

In The Ancient Gods, Part One, the Slayer travels to Ingmore's Sanctum and retrieves the Nameless One's life sphere, intending to bring it to the Luminarium in Urdak in order to force him to take a physical form; the Codex states that the Nameless One can only be destroyed when he has a physical body, but should this happen then every demon outside of Hell would be immediately destroyed as their connection to their reality is severed. When the Nameless One is restored, he is revealed to be identical in appearance to the Slayer, even bearing the Slayer's mark on his back. The Father states that "he is you [the Slayer], in their world" and that the Nameless One is not so much a king as he is a warrior, the only being strong enough to control Hell.

Codex entries from Part Two confirm that the Nameless One foresaw that the Slayer would pursue and destroy the Khan Maykr once her alliance with Hell was exposed; she would be destroyed by a weapon she had helped create, giving the Nameless One the vengeance he sought. Because of Samur's actions in hiding the Father, the Nameless One also intended for the Slayer to destroy him as well. The Nameless One knew that he would eventually have to face his creation, but intended to meet the challenge instead of fleeing. 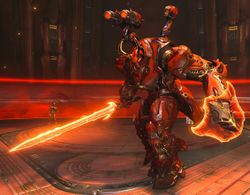 The Dark Lord in his power armor, with his sword and shield

The Nameless One normally attacks with a plasma cannon at range, and tries to hit you with an energy sword up-close - it is important to dodge his melee attacks as much as possible, as successful melee blows will regenerate the Nameless One's health based on how much damage is inflicted on the Slayer. The Nameless One has five health bars; each time his health is depleted, perform a glory kill on him to begin the next phase of the fight.

Throughout the fight, ammo, armor and health are scattered around the arena; if you need more supplies quickly, use the flame belch and chainsaw on the zombies around the arena to replenish yourself. The Nameless One can also summon wolves that each drop half a hammer charge when killed.