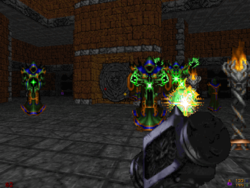 The player being attacked by several Dark Bishops in Heresiarch's Seminary.

Dark bishops are enemies in Hexen. They are levitating, spellcasting humanoids enshrouded by colorful robes, somewhat reminiscent of the Disciples of D'Sparil from Heretic but with a less ragged look. They first appear in the third hub, Heresiarch's Seminary, and continue to appear in the remaining hubs of the game. Dark bishops are not particularly sturdy as Hexen monsters go, with 130 hit points; only the wendigo and afrit have fewer. According to the manual:

"Many of the more powerful leaders within the Church have been warped into mindless servants of the Serpent Riders, and their magical powers have been multiplied tenfold. These vile creatures are known as Dark Bishops, and though they are frail of limb, they are extremely powerful. They fire circling projectiles of magical jade that track your position, and the Bishop phases in and out of existence as they travel from place to place. A dangerous opponent by itself, a nightmare when encountered in groups."
― Hexen instruction manual

Dark bishops are flying enemies with a rapid-fire ranged attack which moves in a swirling, loosely homing pattern. Their projectiles do minor damage individually, at four hit points per projectile, and twelve projectiles fired per attack. Dark bishops can perform sudden strafing movements that leave translucent afterimages of themselves behind, making them harder to hit; unlike the afrit, they do this at random rather than in response to incoming projectiles. Melee combat with a dark bishop carries an additional risk: when one is killed, it explodes and will hurt anything within the blast radius, including other bishops. Since the explosion also hurts monsters, it can be used to the player's advantage. A mage forced to deal with dark bishops in close quarters can avoid damage from their death explosion entirely by using the Frost Shards, which cause them to freeze and shatter instead.

Dark bishops also have a melee attack which does the same total damage as a stream of projectiles in one hit. It can only be used at extremely close range.

If the mage uses an Icon of the Defender, the bishop's projectiles will not only be reflected but will also home in on the bishop instead. The Disc of Repulsion, on the other hand, is not very effective, as unlike most seeking missiles, the projectiles will re-target on the player shortly after being repulsed.

In the IWADs the dark bishop is first encountered on these maps per skill level:

The IWADs contain the following numbers of dark bishops per skill level: