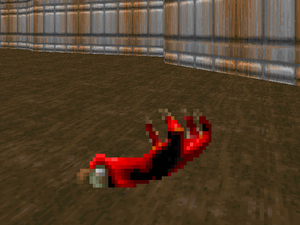 The dark claw pickup sprite from Doom v0.3 can be seen at far right.

The dark claw is a weapon mentioned in Tom Hall's original design document for Doom, the Doom Bible. Its description there is as follows:

Like the Unmaker, this demonic weapon never made it to the finished game. While the Unmaker was eventually realized in Doom 64, the dark claw remained abandoned. Draining life energy from enemies was a design decision that was discarded in the later stages of game development. However, the concept was used in Doom 3, in the shape of the Soul Cube. A "vampiric powerup" can also be found in the alpha versions, up until the very last versions prior to release.

An unused HUD icon graphic exists in the Doom v0.2 IWAD with the lump name WPICCLA, and the name of the weapon occurs in the WBOXCLA lump.

A crude pickup sprite has been added for the weapon in Doom v0.3 as the CLAWA0 lump, which only consists of the silhouette of the weapon taken from its HUD icon and filled in with various red gradients.

The pickup sprite has been refined into an image of a severed red hand in the Doom v0.4 IWAD. Its orientation has been reversed from the icon so that it more realistically rests on the ground.

The pickup sprite has been removed but two graphics for the status bar still make reference to its prior existence: I_DACLAW and I_WCLAW. The concept had apparently finally been abandoned by this point.

A HUD overlay image from the first alpha 0.2 version contains a mention of a "Captain's Hand". Game programmer John Romero has confirmed that this item—along with the "Heart of Lothar", the other item mentioned—was only meant to be a special key, reflecting the story outlined in the Doom Bible. Starting with the v0.4 alpha, the overlay was removed. No further mentions of these items can be found.