Darkest Room is a single-level PWAD for Doom II using a Boom-compatible source port that came out in July 2019. It was designed by Paul977 and uses the music track "Misty Menace" from Donkey Kong Country.

Darkest Room includes one custom monster, a green cyberdemon with 700 hit points (replacing the spiderdemon) that was created by Zachary Stephens (Ribbiks). The map was chosen as one of the runners-up in the 2019 Cacowards proceedings. 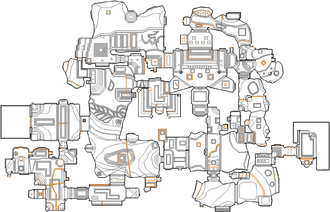 Map of Darkest Room
Letters in italics refer to marked spots on the map. Sector, thing, and linedef numbers in boldface are secrets which count toward the end-of-level tally.

* The vertex count without the effect of node building is 8268.