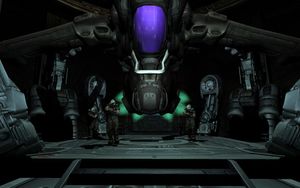 Marines disembark from the Darkstar to search the Exis Labs teleporter for survivors.

The Darkstar is a Phantom Class Dropship maintained by the UAC as an interplanetary shuttle between Mars and Earth in Doom 3. It has the designation of Transport 4409. It departed Earth for Mars from a spaceport at Burns Flat, Oklahoma, and was scheduled to return shortly on the reverse flight path.

The Darkstar is initially crewed by at least one pilot, who can be heard speaking with Mars City aerospace traffic control during the opening cinematic of the game. During the events of The Lost Mission, it has been additionally crewed by a complete squadron of heavily armed space marines.

Elliot Swann, Jack Campbell, and an unnamed Marine Transfer were listed as the only passengers on the Darkstar at the time of its arrival. In addition, cargo including 2 SUP8890 shipment bins of administrative and data storage supplies, 3 TS4109 Metaseal containers, 4 small UA91 GS crates, and 1 large UA99 GS crate were on board.

The Darkstar was scheduled to be loaded with additional cargo before its scheduled return, amongst which were various sealed containers stated to contain classified biological specimens. In combination with the angry protests from Malcolm Betruger that his incoming and outgoing cargo be allowed to pass through port without inspection, in direct violation of UAC protocol, it is entirely possible to speculate that these containers might harbor live but sedated demons. It is possible that this initially inconsequential detail was left in as a natural opening for a direct sequel to Doom 3.

It is possible to attempt to delete these outgoing items from the Darkstar's shipping manifest by accessing a console on the upper balcony of the landing pad, but this will provoke an angry response from the console that the Marine has insufficient access to delete classified cargo items.

Dr. Marcus Caseon intended to return to Earth on the Darkstar's next outgoing voyage, and could be found waiting to board the ship just outside the inner airlock. It is unknown if he was able to board before the demonic invasion occurred.

The Darkstar later picks up Dr. Richard Meyers and the lone survivor of Bravo Team after they destroy the Exis long-range teleporter.