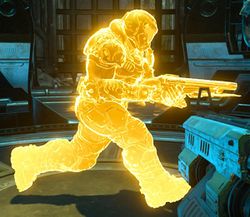 The dash is an ability introduced in Doom Eternal which allows the Doom Slayer to move horizontally at high speed. The dash is first acquired in the form of a glowing artifact found in Exultia.

The dash can be used twice in quick succession before it must recharge - while the dash can recharge in mid-air, it will not recharge fully until the Slayer has landed. The Slayer can also find golden glowing capsules known as "dash pickups" in certain locations, which instantly and fully recharge the dash meter allowing him to make very long jumps.

The following upgrades affect dashing and are unlocked by spending Praetor suit points: