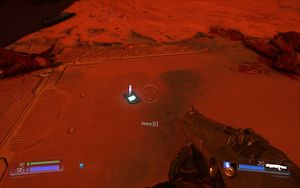 A datapad is a small electronic device, somewhat resembling Doom 3's PDA, which occurs in the single-player campaign of Doom (2016). Datapads hold data log messages which are recorded to the player's codex when the datapad is collected. Datapads are silver with blue trim, and project a holographic UAC logo over their screens.

The second and any subsequent data log entries for most monsters and weapons are acquired from datapads, whereas the first entries are acquired automatically by encountering the item or creature. Finding all datapads unlocks the Historian achievement.

There are between one and five datapads in each level, except for Argent D'Nur, which has none.

It is possible to create custom datapads in SnapMap by using the datapad model for the container pick-up item and attaching a datapad message object to its "On Picked Up" event output. Custom datapad messages can also be triggered in response to any other event without involving the container if desired. Note that SnapMap data log messages are not recorded permanently, however, and can only be viewed once unless the trigger to show them is made repeatable - one way to do this is to create an event that respawns the datapad, so that the player can collect it again.