Dave1 is a single-level PWAD for Doom, designed by David Bruni in 1994. The level revolves around exploring a very tight concrete base with long corridors and secret rooms. It uses hitscanner enemies in great lengths. 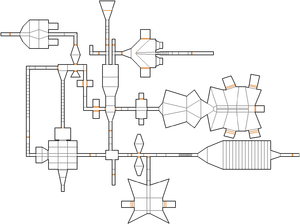 Map of Dave1
Letters in italics refer to marked spots on the map. Sector, thing, and linedef numbers in boldface are secrets which count toward the end-of-level tally.