Day of the Acolyte

Day of the Acolyte is a single-level PWAD for Strife and limit removing source ports that came out in 2006. It was designed by Samuel Villarreal (Kaiser) and uses the music track "". Return of The Order is also known as Kaiser 23, and is Samuel's second of only a handful user-created Strife levels released via the idgames archive.

Day of the Acolyte includes dialogues for no fewer than 14 named characters. 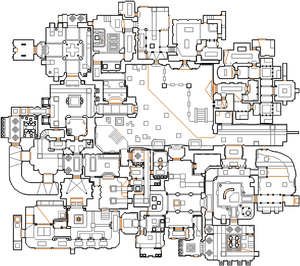 Map of Day of the Acolyte
Letters in italics refer to marked spots on the map. Sector, thing, and linedef numbers in boldface are secrets.

* The vertex count without the effect of node building is 7796.