dead.air is a single-level PK3 for Doom II that requires GZDoom source port to play. It was designed by Xaser Acheron. It was released in December 2016 and is the spiritual sequel to his map dead.wire. It received one of the 2017 Cacowards and reached second place in the Vine Mapping Contest 2016.

After some "rather unusual signal interference" the global news network is down for repairs, and a top UAC network engineer (the player himself) is assigned to debug the system.

The WAD "tells the tale of what happens next..." 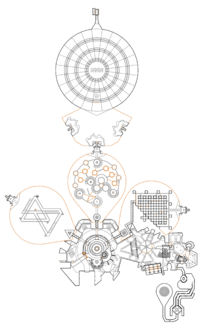 Map of dead.air
Letters in italics refer to marked spots on the map. Sector, thing, and linedef numbers in boldface are secrets which count toward the end-of-level tally.