dead.wire is a single-level PK3 for Doom II that requires GZDoom source port to play. It was designed by Xaser Acheron.

The map was granted one of the 22nd Annual Cacowards, and was featured in Doomworld's Top 100 Most Memorable Maps, placing 63rd. In December 2016, it received a sequel, dead.air.

After a "strange" signal originated from a deserted installation, an engineer (the player himself) has been employed by the UAC to investigate the source of the signal.

The WAD "tells the tale of what happens next..."

The WAD adds the following weapons to the game: 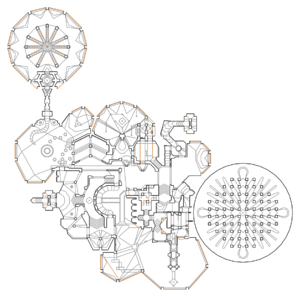 Map of dead.wire
Letters in italics refer to marked spots on the map. Sector, thing, and linedef numbers in boldface are secrets which count toward the end-of-level tally.

Although the overall objective of the level is to reach the final arena where the boss fight takes place and to destroy all the enemies in that arena, the player at first has to wax three multi-colored torches. To do this you must visit various places in the level where new collectable weapons rest. Many types of enemies on the level are rendered translucent, and this makes most of the problems, since they aside from being partially visible never utter sounds (except for projectiles and death). There is also no intermission screen, so to watch the results the indicators on the automap should be used. Skill levels are meaningless.

The following enemies use translucent rendering:

All others are opaque. This includes demons as opposed to spectres.

No keys are present on the map. The order in which you wax the torches is not important but it is first recommended to obtain needed weapons. Start the level with heading to the right of the corner but beware a spectre here. Kill him or leave for later. Once you press the button, the door that you were back to will open revealing a shotgun and shells. Once you obtain shells at least you will be able to use the alternative attack of your riffle. This attack is recommended to use instead of the shotgun, though its reload rate is lower. To the left of the starting point the door opens. Two imps and a Hell knight that were behind this door may come out (again, they are transparent, so it is difficult to notice them). Go there and descend on the stairs. Three lost souls will be behind the window and are also transparent. Go to the left where green armor is and immediately head to the right. Jump on the panels until you can see an area to the right (east). Cross the bridge to the north (dispose of revenants first) and head to the right staircase, not left. Kill the arachnotron and collect health bonuses if you have enough ammunition. Then, ascend up on the second staircase. In the green room take the left or the right when you see a wall. An interesting effect will occur: you will be silently transported to the western side of the map, though unnoticeable to the eye. 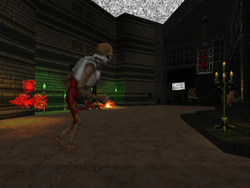 You are now visiting the green area in which laser rifle can be taken. Walk on the stairs in front of you and take this rifle. That is what needed to wax the green torches here and near the final area. Prepare to fight with a group of enemies. This includes mancubi, revenants and arachnotrons. All they are opaque, so the combat is not difficult. Once you disposed of them go to the north west part. You will see an open area and floating round platforms. Jump over on them and you will be led to the room of imps. Dispatch of them and go to the following room to the east. Kill the mancubus that acts as an obstacle. The arrow on the slightly raised platform he was on points to the lower balcony with another mancubus. Dispose of the second mancubus first, then drop into the balcony to the bottom. Open the door to the left and you will be in a vined corridor at the lower part of the above room. The doors in front of you are broken, so head to the right and open other doors. 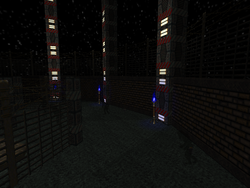 You are now visiting the blue area in which M16 must be found. Drop to the ground and obtain this weapon. Prepare to fight with translucent imps. Find a way back to the stairs but also dispose of a revenant. Return to the balcony. A square staircase has appeared. Walk on it up. Now go to the room to the right, then head on the stairs back to the bridge and cross it to the south. Head back to the right and jump on the panels until you can see a passageway to an open area and a line of armor bonuses. Collect them and head to the open area. Cross a bridge to the south. In the consequent area turn left and drop to the ground where a dead cacodemon and a berserk pack lie. Be noted once you take the berserk pack the spirit of this cacodemon will return to life, so dispose of it. Press the switch to form a ground in place of the void. It is now safe to walk on it.

Drop to the ground. Actually, you are visiting the red area now, though it is not recognizable since "nothing red is present". Take the flamethrower on a platform and you will be brought to an entirely new room of columns. It is one of the most difficult areas. You start in the center of the room where you can see every enemy if you look around: the rows of demons and four arch-viles at each far end of the room. The objective is to kill every of them. First, go to the any of darkest parts and knock off an arch-vile with flamethrower or laser rifle (the latter is more effective). Then repeat to other arch-viles who will already wander around. Once four of them are dead knock off all the demons. As soon as all they are dead a beam at the center will appear. Touch it to get back to the previous area. Now, the red torches accompany this area. Go to the lift located at the north east. At the top jump into the window and you will be at the starting room. 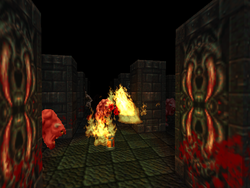 You are now prepared to go to the last area to finish the level. Go back to the large bridge and cross it. This time, head to the staircase to the left. Go through all the rooms until you are in the void area where the floating round platforms are. Jump over all the platforms until you arrive in an area with a switch and three waxed torches that come with it. Press the switch. In case if not all torches are glowing you will get a message "The torchlight still wanes...", so you will need to return to the areas of that colors of the torches that "wanes". Otherwise, you will be able to successfully drop to the ground that used to be void. Then, walk up on the spiral staircase and jump to the shaft of the "exit" area.

HRC weapon first appears here and is recommended to use solely. Collect megasphere, cells and HRC itself and go to the arena. To win you need to fight three waves comprised of a same enemy type which is rendered transparent (the cells will spawn each time a wave begins). The first wave now appears and consist of imps. Kill them using HRC but do not approach too close. As soon as they are dead the second wave appears which consists of Hell knights. Dispose of them and prepare for the last wave consisting of two cyberdemons. This is harder version of the original cyberdemon, as it fires rockets at a higher rate than normal and rapidly gets you killed until you hide behind a column. Once they are dead you will be able to ascend to the switch. Flip it and the overall area will be "disinfected". The screen fades out and you finish the level. Now enjoy the credits screen and its music.

* A scripted actor who will spawn later.

The map was created for the "Doomjà-Vu" contest organized by Daniel Gimmer (Tormentor667), reaching third place, and therefore like all other entrants in the contest is based on the layout of E1M7: Computer Station.