Deadlock is a single-level PWAD for Hexen, intended for deathmatch but also playable in single-player and coop modes. It was designed by Sverre André Kvernmo (Cranium) and includes his demo completing the level in the Fighter class at skill level 5 (Titan). 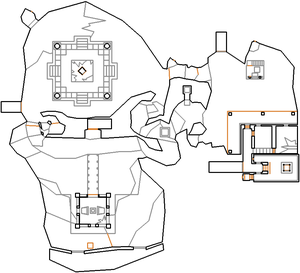 Map of Deadlock
Letters in italics refer to marked spots on the map. Sector numbers in boldface are secrets which count toward the end-of-level tally.