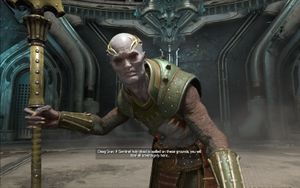 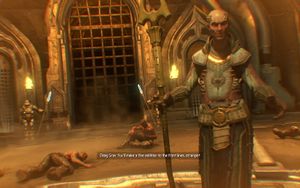 Deag Grav before his corruption, as a priest of the Order Deag, in one of the Slayer's flashbacks. 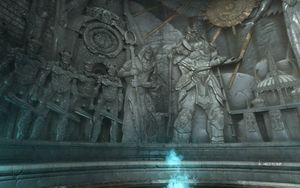 Deag Grav appears in relief form in "The Gift of Argent", bowing to the Khan Maykr as King Novik exchanges Argent energy with her.

Deag Grav is one of the three Hell priests appearing in Doom Eternal, a former member of the sacred Argenta Order of the Deag, a priesthood originally founded upon worship and study of the Elemental Wraiths and later rededicated to veneration of the Maykrs. He played a significant role in the downfall of Argent D'Nur by convincing the Betrayer to hand over the keys to the Elemental Sepulchre to the Hell priests and to grant them safe passage there. Deag Grav was first mentioned in passing in the backstory of Doom (2016).

As a priest of the Order Deag, one of Deag Grav's duties was oversight of the sacred Coliseum at Sentinel Prime, where outlanders and prisoners of war were given trial by combat for the right to fight in the front lines of the Argenta military. In this capacity he met the Doom marine after the latter was transferred there and made a name for himself by single-handedly defeating dozens of opponents in unarmed combat. Grav declared the marine fit for military duty, but before he could go any further, he was stopped by the Khan Maykr. She demanded that Deag Grav bring the marine to her for questioning regarding the nature of Hell and its demons. This line of inquiry would eventually lead to the Khan Maykr's pact with the Nameless One and the creation of Argent energy.

Deag Grav evidently played a key role in the creation of Argent energy on behalf of the Khan Maykr, as it is he who appears alongside King Novik to present the energy to the Maykrs in a relief entitled "The Gift of Argent", which can be found carved into the wall of the elevator leading to the Coliseum. It is stated by Samuel Hayden that it was the Deag priests who discovered how to combine the essence of the demons with Wraith energy, and that they together organized the legions of Argenta slaves in secret to construct the Nekravol, the massive soul factory where the energy would be made.

After the Night Sentinels discovered the true nature of Argent energy and civil war on Argent D'Nur began, the Order of the Deag remained outwardly neutral until the elite of the Sentinels—along with the Doom Slayer—planned a foray into Hell to destroy the Nekravol. At this point, the Deag orchestrated the warriors' demise by blocking the return portals, trapping them in Hell.

At some point after this, Deag Grav himself began to torment the Sentinel Commander Valen with images of his son who had been lost in combat, showing him being tortured in the fires of Hell. Unable to bear these visions, Valen accepted a deal with the demons, orchestrated by Grav, in which he would lead the priests to the Elemental Sepulchre where the Wraiths slept under the watch of the Sentinels in exchange for the return of his son. Seizing the opportunity, Deag Grav used the power of the Crucible to slay the ancient deities and used their power to forge the Well, a new apparently limitless source of Argent energy. This act doomed the world of Argent D'Nur - the demons attacked en masse, and Valen—known afterward as the Betrayer—watched his son return in the form of the Icon of Sin to devour parts of their world wholesale. The loyalist Sentinels, bereft of their Wraith-based Sentinel energy, were unable to effectively resist and ultimately perished in a last stand. The remaining uncorrupted portions of the Sentinel home world were left in ruins to be ruled by the Deag—now known as the Hell priests—and their Maykr masters.

After the Doom Slayer destroyed Deag Grav's Well in the events of Doom (2016), the Khan Maykr sought to renew the flow of souls by attacking Earth. As part of her plan, Deag Grav went to Earth with the other Hell priests to orchestrate its corruption. The Doom Slayer confronts Deag Grav and his cohort, Deag Ranak, aboard a floating demonic citadel in the ruins of New York City, but the Khan Maykr ushers them away to safety after he tosses them the severed head of Deag Nilox and then threatens them with his pump-action shotgun.

After the elimination of Deag Ranak, the Khan Maykr then spirits Deag Grav, the sole remaining priest, away to an unknown location from which he is able to continue his work. VEGA is unable to find his signal, but believes that Samuel Hayden will know where he is, for reasons not explained. After the Doom Slayer rescues Hayden from the fallen ARC Complex, he reveals that Deag Grav is at Sentinel Prime, but that the city cannot be accessed by slipgate except from the ancient lost city of Hebeth, which is located in the core of Mars. Traveling there, the Slayer gains access to Sentinel Prime, where he confronts Deag Grav in the corrupted Coliseum.

Grav taunts the Slayer with knowledge that if he kills the priest there, shedding holy Sentinel blood on the grounds of the Coliseum, he will lose his status as a sovereign warrior king among the Argenta. He then forces the Slayer to fight an ancient foe that he himself placed in the Coliseum, the Gladiator. Once the Gladiator is eliminated, however, the Slayer obtains the token protecting Grav's soul from the slain demon. Without showing any hesitation, the Slayer executes Grav with a shotgun blast to the head as the priest tries to exclaim that the consumption of Earth will continue even without him.

When Deag Grav dies, the Coliseum's atmosphere becomes dark blood red and energy streams out of the fallen priest's body. Several nearby Sentinel guards activate their Argent-tipped spears and come toward the Slayer as if to attack, and he is forced to flee with the aid of VEGA, who is apparently now able to open a slipgate for his escape due to the death of the priest.