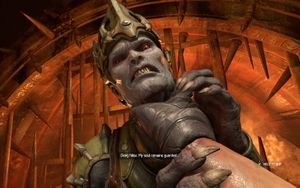 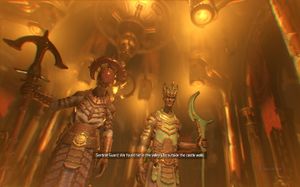 Unlike the other two Hell priests, almost nothing is known about Deag Nilox - his Codex entry describes him as spiteful and cruel, frequently capturing people alive so their still-living blood can be used in his rituals. He can be seen in the Doom Slayer's flashbacks in the priest's temple and later again at Sentinel Prime during his capture by the Night Sentinels, and examines the Outlander's helmet closely along with Deag Ranak. He also appears in pages of the Ligra Sultagenta observing the Outlander being held in chains, and later acting in concert with the other Hell priests to trap and kill the elite of the Sentinels. In The Ancient Gods, Part One, he is identified as the creator of the turrets which serve to guard important areas and allow him to view distant locations.