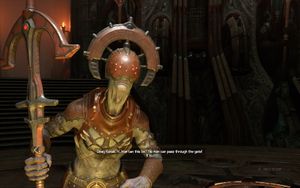 Deag Ranak aboard the demonic citadel. Deag Ranak (at left) along with Deag Nilox, before his corruption, in one of the Slayer's flashbacks. One of Ranak's appearances as a giant holographic projection.

Deag Ranak is one of the three Hell priests appearing in Doom Eternal, a former member of the sacred Argenta Order of the Deag, a priesthood originally founded upon worship and study of the Elemental Wraiths and later rededicated to veneration of the Maykrs. Deag Ranak acts as an antagonist during the first four levels of the game, with his elimination being their main overarching objective. The most inventive of the priests, he uses genetically engineered and cybernetics-enhanced demons to oppose the enemies of Hell and the Maykrs.

"Was it not the Slayer who brought the demons to us? The Khan Maykr has you to thank for the gift of Argent energy. It is you who are responsible for your people's suffering."
― Deag Ranak to the Doom Slayer

In one of the Doom Slayer's flashbacks at Sentinel Prime, Deag Ranak is shown alongside Deag Nilox before his corruption. After examining the Slayer—then known only as an Outlander—and his helmet, he instructs the Night Sentinel guards holding him captive to take him to the Coliseum to be judged in the same manner as all those who would "stray from the path" (as stated in the Ligra Sultagenta) in the lands of the Argenta.

Deag Ranak next appears in records of the fall of Argent D'Nur, acting in concert with the other two Hell priests against the faithful of the Sentinels. None of his specific activities during that time are recorded, however.

In VEGA's analysis of the Cultist Base, he finds that Ranak had long been working in secret with Olivia Pierce before and during the events of Doom (2016) and was in part responsible for the corruption of the UAC into a demonic cult. After Olivia fell against the Slayer in the form of the Spider Mastermind, he seized direct control of the cultist factions within the conglomerate and bent its mission entirely toward opening the gates of Hell on Earth. As part of that mission, he constructed a polar base on Earth from which to coordinate activities and to serve as a factory for cybernetic demons of his own design, including the Doom hunters. He sent his followers into Hell to retrieve genetic samples from Olivia's corpse, which led to the creation of the arachnotrons. He additionally envisioned the design of the Paingiver, the demonic rocket launcher.

The Doom Slayer first meets Deag Ranak in the course of Doom Eternal aboard the demonic Citadel floating over the remains of New York City, alongside his cohort Deag Grav. Upon seeing the Slayer, Ranak protests that no man should have been able to pass through the gate, only to be tossed the severed head of Deag Nilox in response. After having words with the Slayer, who then threatens the priests with his shotgun, the two both teleport away to safety.

After this, Ranak is unable to be tracked with the Slayer's current equipment, and VEGA determines that the Celestial Locator will need an upgrade in order to isolate his signal. After obtaining the needed upgrades, the Cultist Base and its neighboring Doom Hunter Base facility in the far polar north of Earth are discovered as his location. The Doom Slayer takes a slipgate there and progresses through the facility. During the entirety of this journey, Ranak taunts the Slayer, blaming him for the fall of Argent D'Nur and the attack on Earth, stating that he does not fear the Slayer, and commanding his demons and followers to attack. He appears many times in the form of massive holograms. After eliminating all of the resistance in the Cultist Base, VEGA states that Ranak's signal has stopped moving at the Doom Hunter Base.

Once the Slayer arrives there, Ranak leads him through the facility remotely to witness the construction of one of his sentries—one of the Doom hunters—built from the remains of an ancient Agaddon hunter enhanced with weaponry and cybernetics of Ranak's own design. The Slayer then has to fight three of these demons back to back while under assault from many other enemies.

Succeeding in eliminating all of Ranak's guardians, the priest appears before the Slayer in person. His last resort is to attempt to bargain with the Slayer, asking him if he does not seek powers and gifts to aid him in his quest. As Ranak attempts to make a more specific offer, the Doom Slayer executes him via decapitation, cutting his head off with the Doomblade. The Slayer then tosses the token which protected Ranak's soul onto his body, having already obtained it from somewhere else previously, after which it gradually dissolves. As the Slayer walks toward his slipgate to exit, Ranak's right eye can be seen twitching.

Given the Hell priests' long history of deceits and betrayals, it is exceedingly unlikely that any offer Ranak could have made would have been legitimate.

Deag Ranak acts as the host of Horde Mode, confronting the Slayer with the challenges he has devised, and particularly commanding specially empowered, "branded" bounty demons to attack during the battle rounds.