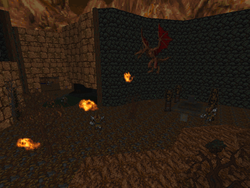 A death wyvern in Brackenwood

The death wyvern is the first boss encountered in Hexen, dwelling in a secluded cavern and guarding the exit from the Hypostyle. Killing the death wyvern is the key to unlocking the bars in front of the exit, and hence completing the Shadow Wood hub. The death wyvern is a returning enemy in Hexen: Deathkings of the Dark Citadel, where four of them patrol the outdoor areas of Brackenwood, though no longer as a boss creature. While possessing an exceptionally strong attack, death wyverns are relatively frail with only 640 hit points, less than a baron of Hell in Doom. According to the manual:

"Like the Reivers, these creatures are Undead, and their thirst for the blood of living creatures is surpassed only by their hatred of anything but themselves. The Death Wyvern is a formidable opponent, and should be dispatched immediately - if not sooner."
― Hexen instruction manual

A death wyvern moves along a set pathway, and attacks any players in its line of sight by shooting medium-fast fireballs which explode on contact. It fires continuously as long as the player is in its path, but cannot adjust its heading to keep the player targeted if he moves away. When a death wyvern's fireballs hit the ground or a wall, after a short delay, that same spot will burst into flames again, causing blast damage to anything still nearby. This makes the death wyvern's attack one of the most deadly attacks in the game. The presence of other enemies to block the player's path can thus make the death wyvern's attacks even more deadly by preventing escape from the residual explosions. For this reason, it is best to take out all other opposition before focusing on the wyvern itself.

The death wyvern cannot turn around in mid-flight, and is only capable of changing directions in wide arcs, so the best way to take one out is with the Wings of Wrath: the player can just fly behind the death wyvern while attacking it with close-range weapons. For a mage the Arc of Death is best, as a hit from it will lock on to the otherwise difficult-to-target wyvern.

The death wyvern uses a different AI from other creatures, and cannot function if the map is not set up correctly for it. The first requirement is that the wyvern be given another object with a matching TID to its own; this will be its first destination upon awakening. In the Hypostyle, a hapless ettin serves this purpose and appears to be slain by the wyvern during its awakening. The other requirement is a network of at least two map spots to serve as waypoints. The argument attributes of each waypoint specify the TIDs of up to five destinations for the wyvern to choose from at random as its next destination.

Outside of flying to each consecutive waypoint, the death wyvern has no path finding AI and can become stuck if a wall or solid object blocks its route to its current waypoint.

If set up incorrectly, the wyvern may remain stationary and repeat its sight scream continuously. 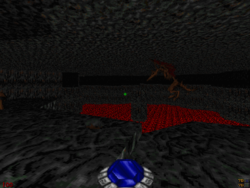 The Death Wyvern patrolling in the Hypostyle

In the IWADs the death wyvern is first encountered on these maps per skill level:

The IWADs contain the following numbers of death wyverns per skill level: