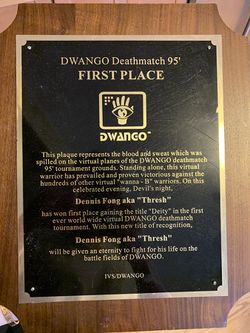 Deathmatch '95 was a deathmatch tournament held by DWANGO between September 18, 1995,[1][2] and October 30, 1995.[2][3][4] The qualification rounds of the tournament were chiefly played on the various regional DWANGO servers as series of matches in The Ultimate Doom, Doom II, and Heretic in the United States.[1] Abroad, separate qualifying events were held in the United Kingdom which resulted in two European players advancing to the finals.[5][6] A French leg of the tournament was originally planned as well, but contemporary sources seem to indicate that it ultimately did not take place.[7]:111 The semi-finals and final match were held as part of the Microsoft Judgment Day event in Redmond, Washington, sponsored in part by GT Interactive, id Software, and other corporations, and doubled as the release date grand reveal for Raven Software's newest Doom engine title, Hexen: Beyond Heretic.[2][3][4][8]

Only active DWANGO users were eligible to register, though an account could be registered specifically to participate in the tournament.[1] Registration ran from at least the announcement of the event on September 18 to the deadline stated by DWANGO CEO Bob Huntley of September 29,[1] though a later Usenet post by Lance Lancaster suggests that this may have been extended through the weekend ending on Monday, October 9.[9]

Users were required to own registered copies of all three of the games involved in the tournament:[1]

Players received temporary "VIP" status on the DWANGO network once their entries were accepted, which allowed for unlimited play time.[1] This ensured that players would be available during their scheduled matches - failure to show for or complete a match in a timely manner would result in disqualification.[1]

Each match during the DWANGO server tournaments consisted of a five minute round in each of the three games, with the winner determined by a combined frag count between all three; 30 minutes total were allowed for completion of the three games.[1] Players would be assigned a random level from each game on which to hold their matches; if the players both agreed, another level could be selected instead.[1]

Matches in the semi-finals at Judgment Day were conducted as five-minute-long, single-round, single-elimination matches in Doom, Doom II, and Heretic, using Deathmatch 2.0 settings on skill level 4.[7]:112 The final match took place in Hexen and served as the game's public reveal.[2][3][8][10]

Matches during the DWANGO server tournaments were held on Saturdays and Sundays between the hours of noon and 4:00 PM. The results of round eight determined at least 22 of the participants who would go on to compete in the final rounds in Seattle.[1]

A separate attached tournament was held in the United Kingdom, sponsored by GT Interactive Europe, PC Zone magazine, and retailer HMV.[5] Referred to as the World Deathmatch Tournament 1995 UK Heats, it was held as a series of live events at HMV retail outlets refereed by PC Zone attendants.[5] Registration was carried out through distribution of a coupon in the issue of PC Zone released on October 7, 1995, with additional entrants not having a coupon admitted at the store manager's discretion.[5]

The games were played on a four-player network of Pentium 100 PCs on E1M1: Hangar of the Ultimate Doom. Each game was played to a minimum of 20 frags.[5] The winner of the in-store tournament would earn transportation provisions to the finals, with the possibility of admission to non-winning high scorers to fill out the bracket if it proved necessary.[5]

Eight regional finalists were selected to take part in the final on October 22 at Level One, HMV on Oxford Street, London.[5] From this final, one champion was selected to go on and take part in the Deathmatch '95 finals in Seattle. As with the American tournament, the final round involved matches in all three of The Ultimate Doom, Doom II, and Heretic.[5]

For the full results of this tournament, see Deathmatch '95/UK tournament results