Decade is a map designed by Russell Pearson and released in 2004. It requires a ZDoom-compatible port. It uses the music track "Sinister" by Robert Prince. There is no par time.

The level was constructed as a homage to celebrate that 2004 was Doom's tenth year. It is a "new school" map (using detailed architecture, ACS and other port features) constructed to be evocative of iconic areas from both Doom and Doom II.

It is built for single player only: there are no cooperative or deathmatch player starts. The level received one of the 11th Annual Cacowards at Doomworld. 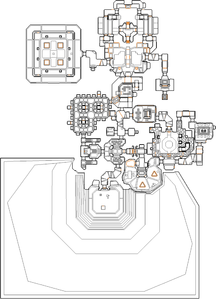 Map of Decade
Letters in italics refer to marked spots on the map. Sector numbers in boldface are secrets which count toward the end-of-level tally.

* The vertex count without the effect of node building is 8934.