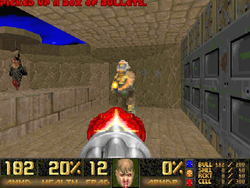 Screenshot from the first level of Decamatch.

Decamatch is a deathmatch compilation WAD released by Team Onslaught in December 1997. Its name is a portmanteau of Deca- (a Greek prefix meaning ten) and deathmatch, referring to the fact that it contains ten levels. The WAD was the first release by Team Onslaught, and was followed by a sequel, Decamatch II: Annihilation, in September 1998.