Defragmentation Factor is a single-level PWAD for Doom II that was released on December 9, 2006 by Eugene Guschin (Wraith777). Built using a combination of Doom and Doom II textures, this sprawling map has many themes including techbase, caverns, marble temples and outdoors areas.

The WAD includes two new enemies through the DEHACKED lump: 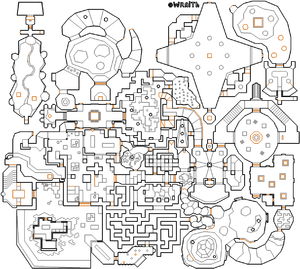 Map of Defragmentation Factor
Letters in italics refer to marked spots on the map. Sector, thing, and linedef numbers in boldface are secrets which count toward the end-of-level tally.

* The vertex count without the effect of node building is 4161.