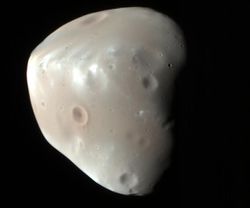 Deimos is the smaller and outermost of the two moons of the planet Mars. It is the scene of the second episode of Doom, The Shores of Hell. "Deimos" is the name of a god in Greek mythology and it may be translated as "fear", "dread" or "terror".

Along with its sister moon Phobos, Deimos was the site of a UAC base with extensive laboratory facilities which had been loaned by the Earth military for use in teleportation research. Just before the first episode of Doom begins, Deimos mysteriously vanishes from the sky. The marine later learns that the moon has been teleported out of its orbit and now floats above Hell, serving as an interdimensional gateway enabling the massive invasion of the Phobos base. Technology stolen from the base by the demons is used to rapidly develop cybernetic breeds of monsters and to create a gateway to Earth, leading eventually to the events of Doom II.

Locations on the moon have been corrupted significantly by their exposure to Hell, far beyond anything seen on Phobos. Vast portions of the base have variously transformed into stone, marble, or wood. Many have been covered in skin, muscle tissue, or tentacles. Blood pours through the base in rivers, and pools of searing lava rise through floors. The sky is choked with burning red volcanic ash clouds.

Like Phobos, Deimos is depicted with a great deal of artistic license in Doom, with gravity thousands of times stronger than in reality (where a typical American professional baseball pitcher's best pitch is seven to eight times faster than the escape velocity of 20 kilometers per hour), and with an apparently breathable atmosphere. Unlike Phobos, however, no vegetation is visible on its barren mountain peaks.