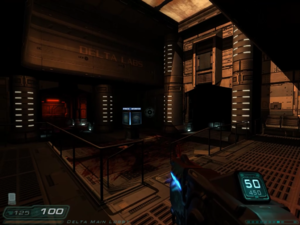 The Delta Labs are an advanced UAC research facility, one of the more recently constructed portions of Mars City. It is one of the most prominent locales in Doom 3. It is also one of the hardest parts of the game, filled with hundreds of demons. The lack of cutscenes makes gameplay constant, though Dr. Betruger constantly antagonizes the player and commands his demons via telepathic messages. The Delta Labs are the location of most of the UAC's teleportation experiments, including the Project Apollo teleporter through which the demonic invasion was launched.

The player returns to Delta Labs after retrieving the Soul Cube from Hell, only to find the area in further ruins and coated in Hellish growths.

The Delta Labs also make an appearance in Resurrection of Evil, and must be visited in order for the player to return the Artifact to its place of origin in Hell. The area begins to merge fully with Hell during these events, periodically entering a state where the entire building is filled with smoke and fire and covered with blood and skeletons.

Sector 1 is the main area and entrance to the Delta Complex. It houses power, control, and administration areas, and has its own reactor. The only known entrances are from the Monorail Station and the CPU Complex. Sector 1 also contains the main warehouse for the Delta Complex.

Sector 2 is divided into two areas. Area 2A is the main medical facility in the UAC. This area also contains the first teleporter created by the UAC as part of Project Mercury. Area 2B houses some demons from Hell and additional research labs. Area 2B also has a lab dedicated to research on Site 3's primary artifact, the Soul Cube.

Sector 3 is entirely dedicated to teleportation research, containing the medium range devices devised under Project Gemini. The first of three teleporters has two destinations: the room itself, and a pad in the upstairs balcony of the chamber. The second teleporter has three destinations: the room itself, a nearby hallway, and a storage room. The final teleporter (which is the main teleporter in this sector) has four destinations: another storage room, a hallway near Test Chamber 1, an office near Test Chamber 3, and a landing near the entrance to Sector 4 on the other side of the bridge destroyed by Dr. Betruger. This pad can also be reached as a destination by the experimental long-range teleporter located in the Phobos Labs.

Sector 4 is the smallest sector, consisting only of a few rooms and hallways, but houses the main portal to Hell, the powerful long-range Project Apollo teleporter. Because the invasion ultimately started here, this blood-drenched area suffered the most damage as it is littered with human skeletons and remains.