"Marine, this is Kelly. If you're watching this, you're tougher than I thought. I guess things aren't always what they seem... Plans have changed, Delta Complex 1's been compromised, you're not safe there. I'm moving to secure Service Tunnel 1. It's not far from your position. We'll meet there..."
― Sergeant Kelly [source]

Delta Labs - Level 1: Union Aerospace Research Division is the fifteenth level of Doom 3. This level contains no demon altercations of any kind for quite some time upon entering it, save some "minor" demonic sounds and lights in some halls and monsters appearing outside from time to time. The Player must initiate power by turning on the main reactor. 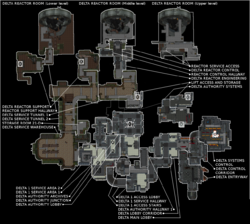 The marine enters the Delta Labs, which have been thoroughly wrecked and have lost the main power. As the marine ventures into the complex, he has several frightening, but harmless supernatural experiences. He also hears demons all around him, but is not attacked. After retrieving a data linker from the lobby and installing it at the Systems Control, he finds a cryptic video message left behind by Sergeant Kelly who warns him that the Delta Complex has been compromised. Kelly advises the marine to meet up with him in Service Tunnel 1. After the message from Kelly is viewed, enemies start attacking.

The enemy count on Nightmare is the same as on Veteran. The only change in the monster amount in BFG Edition is the removal of two cacodemons from the level.