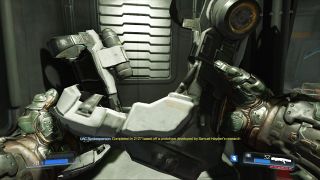 The Delta V jump-boots are a UAC-engineered device in Doom (2016) which can be acquired by the marine and used along with his Praetor suit. These boots enable a second thruster-based mid-air jump to be performed, greatly increasing the marine's maximum jumping distance and height. The boots are acquired near the entrance to the Argent Energy Tower, and are necessary for further progression in the game beyond that point.

According to the codex entry on the device, the boots were originally engineered to enable efficient navigation in microgravity environments, and were in frequent use on the Phobos mining outpost. Like most other technology on the UAC Mars Base, the boots have been enhanced with Argent energy, which is utilized to create the thrust by channeling it in a burst through the boots' boost nozzles.