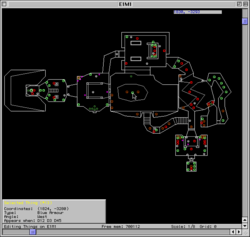 Demon is a level editor for the Apple Macintosh. It was created by James Knight, and started off as a port of the DEU level editor to Macintosh, originally called MacDEU. As Knight developed the editor and changed much of the code, he decided to rename it to Demon since the authors of DEU wished that programs that departed significantly from the original adopt different names. 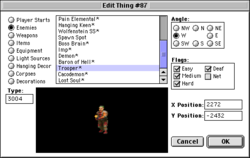 The "Edit Thing" window in Demon

MacDEU and Demon were the first level editors available for Macintosh, though officially neither ever left beta stage. The last version of MacDEU was 5.3b9v4, after which development shifted over to Demon, with the final version of the latter being 1.0b2, released in 1995. James Knight would subsequently release the source code in 1996 on his homepage.