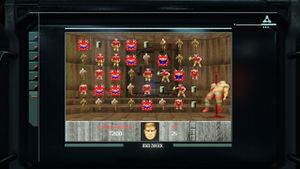 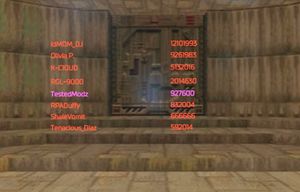 High score table. References to the release dates of Doom and Doom 3 are evident.
This article is about the mini-game from Doom (2016). For the gore mechanic from Doom Eternal, see Destructible demons.

Demon Destruction is a mini-game in Doom (2016) which can be found on a computer terminal in the office of Dr. Olivia Pierce in the Lazarus Labs. It appears to have been the last program which Olivia was using before she decided to unleash the Hell wave that started the invasion, as the terminal states that the game has been placed in suspended mode and can be resumed. Doing so allows the player to play the game.

Demon Destruction is a match-three puzzle game in the style of Bejeweled and Candy Crush, with its alliterative name being an explicit reference to the latter popular mobile game. The pieces are all monsters from the classic Doom series and must be eliminated by moving pieces so that the monsters align into rows or columns of three or more. Matching exploding barrels will result in an explosion which eliminates many surrounding pieces at once for increased score.

The high score table of the game contains multiple Easter eggs, many of which are references to other Doom games. The game uses the same background as Super Turbo Turkey Puncher 3, a screenshot of E4M9: Fear, and features graphics based on the classic status bar, including the Doomguy's face. It also plays assorted Doom and Doom II music tracks at random.

All high scores besides Olivia Pierce's are of id Software employees.