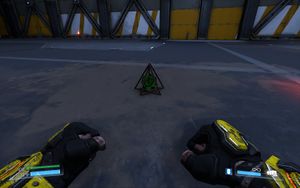 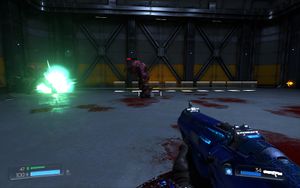 Barons infighting as a result of using the demon control grenade.

The demon control grenade is an equipment item and weapon in Doom (2016) which is only available in its SnapMap mode. Its pick-up appears as a green version of the siphon grenade contained within a metallic frame that is shaped in the form of a triangular prismatic pentagram. The demon control grenade launches a dark purple-and-black projectile that flies straight through the air and, if it strikes a monster, changes that monster's team to match the activator's team. This causes it to behave as a friendly monster, and it will begin to attack and be attacked by other monsters.

Like other side-arm equipment items, the demon control grenade has unlimited use and is balanced by its recharge timer. It can either be placed in a map for a player to find and collect, or it can be specified in a player loadout object and then applied to players either at map start or in response to an event.