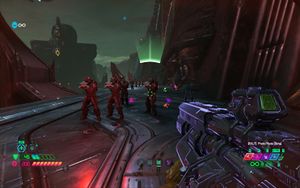 The demonic trooper is an ambient monster introduced in The Ancient Gods, Part Two. They are found in the city of Immora and serve to protect it and the Dark Lord.

Demonic troopers are usually encountered in groups and wield Reaper weapons, but are too fragile to be a serious threat against the Doom Slayer. They will die from a single hit from any weapon, including an uncharged punch or being run over by the chaingun's Energy Shield mod. The only weapon that cannot kill demonic troopers is the chainsaw, because they are classed as ambient demons; for the same reason, they are also not susceptible to glory kills.

Demonic troopers are members of Immora's warrior caste, and have watched over its walls for millenia. The imperial guard of Davoth is considered an honored position among the city's citizens.