Deneb Colony is a single-level PWAD for Doom II, meant for limit-removing ports that was released on September 13, 2014 by Lainos. This map is a spin-off of Lainos' 5till L1 Complex, and focuses on the player trying to send a distress signal to escape the Deneb Colony. It uses the music track "Two Suns" by Ariah. A tiny outro MAP02 is also present, featuring promotional screenshots for 5till L1 Complex. 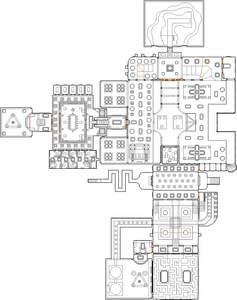 Map of Deneb Colony
Letters in italics refer to marked spots on the map. Sector, thing, and linedef numbers in boldface are secrets which count toward the end-of-level tally.

* The vertex count without the effect of node building is 9833.