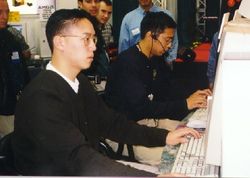 Dennis Fong (traditional Chinese: 方鏞欽; simplified Chinese: 方镛钦; pinyin: Fāng Yōngqīn; Jyutping: fong1 jung4 jam1), also known by his online alias Thresh, is an American businessman and retired eSports player of the first-person shooter video games Doom and Quake. He is a co-founder of Xfire, an instant messenger and social networking site for gamers, which was acquired by Viacom for US $102 million in April 2006. He also co-founded Lithium Technologies, a social customer relationship management company.

In his playing career his highest profile victory came in 1997 at the Red Annihilation Quake tournament, where he placed first and won id Software CEO John Carmack's Ferrari 328. Fong is recognized by the Guinness World Records as the first professional gamer.[1] He played in the Professional Gamers and Cyberathlete Professional leagues. His lifetime earnings in tournament prize money are estimated at around US $16,000. 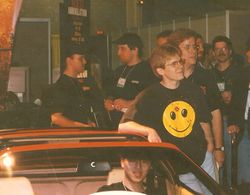 Thresh in the Ferrari he won and John Carmack (second-place finisher Entropy is in the background above Thresh.)

Fong began playing Doom at the age of 16 in 1993. He initially chose the pseudonym "Threshold of Pain", which referred to the ability to withstand enemy fire and suffering. However, as many games had an eight-character ID limit, he went with "Thresh" and liked the word's meaning of "to strike repeatedly".[2]

Fong played in the DWANGO tournament Deathmatch '95, the final rounds of which were hosted at the Microsoft-sponsored Judgment Day event in Seattle on October 30, 1995. Thresh defeated Ted "Merlock" Peterson in the semi-finals, and defeated opponent finalist Stoney to finish first among between 23 and 26 competitors from across the US, France, and the United Kingdom.[2][3]

The highlight of his gaming career was at the Red Annihilation tournament in 1997. He and Tom "Entropy" Kimzey emerged from a crowded field to face off in the Quake level E1M2 "Castle of the Damned", where Thresh defeated Entropy 14−1.[4]

At the peak of his gaming career in the middle to late 1990s, he earned approximately $100,000 a year from prize money and endorsements.[5] He retired in 1997 to focus on his business ventures.

On July 27, 2016, Thresh was announced as the second inductee into the ESL Hall of Fame.[6] Fong has also been featured in Rolling Stone for his gaming prowess.[7] 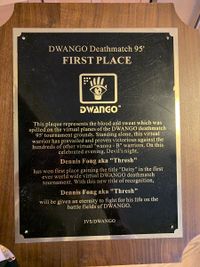 In games, Fong is known for his reflexes, intuition and tactics. People coined the term "Thresh ESP" to describe his unnatural knack for knowing exactly what his opponents were doing. However, he is not considered exceptionally accurate at aiming.[8] In 1-on-1 deathmatch, he made it a priority to understand the level and "control" vital items using timed runs to repeatedly hoard them from opponents, such as the rocket launcher and armor.[5][9]

Fong has been credited with popularizing the WASD key configuration now commonly used in PC gaming.[10][11]