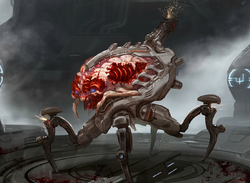 An arachnotron in one of the stages of destruction. Note the destroyed plasma turret.

Destructible demons is a new gore system featured in Doom Eternal, first featured in the QuakeCon keynote presentation on August 10, 2018.

Destructible demons is a visual and mechanical system in which enemies dynamically reflect the amount and types of damage they receive from the Doom Slayer. This changes how the game plays by adding the ability to cripple certain weapons available to enemies, making them useless to that particular demon. An example as pictured to the right is the ability to destroy the arachnotron's plasma cannon, which forces it to attack only with a significantly weaker claw swipe.

The full extent of this system is not yet known, as concept art of the pain elemental shows its eye destroyed. It is not known if this will affect a demon's vision, as cacodemons and mancubi in Doom (2016) could have their eyes destroyed with little effect on the enemy behavior.

An interesting note is that the Hell knight, which otherwise appears very close to its 2016 counterpart, can have its face blown off to reveal a yellow skull and eyes.