The development of Doom was an approximately fifteen month process undertaken by id Software beginning on September 18, 1992,[1] with prior research projects spanning back to the prior month of May, and ending with the game's first release as shareware on December 10, 1993. It was the most extensive development process undertaken by the company up to that point, and required use of—and even in-house development of—new technologies, methodologies, and utility software.

Following the successful release of Wolfenstein 3D in May 1992, most of the id Software team worked on the sequel, Spear of Destiny.[2]:98 Since this game used the same engine as Wolfenstein, lead programmer John Carmack could use the time to begin work on the company's next-generation graphics engine. With significant effort, choosing to isolate himself from the rest of the team for a long period of time in order to avoid distractions, he implemented various new features, including varying light levels and texture-mapped floors and ceilings.[2]:99,100 He even added support for sloping floors, although this feature was later abandoned. The engine was not initially developed with Doom in mind, and in fact Doom was not the first game to make use of it: Raven Software licensed an early version for Shadowcaster, which would be published some months before Doom.[1][2]:98

After the release of Spear of Destiny in September 1992, development began in earnest. The initial idea was to make a licensed game based on Aliens, one of the team's favorite science fiction-action films, and some negotiations were conducted with 20th Century Fox.[1] This plan was eventually abandoned in order to retain more creative freedom.[2]:100 John Carmack instead conceived of the basic theme for the game: demons versus technology. Doom was then imagined as a cross between Aliens and the team's favorite B-grade horror movie, Evil Dead II.[1][3][2]:101 The idea to include demons was also inspired by the crew's most recent Dungeons & Dragons campaign, which had ended with demons overrunning an entire planet.[2]:108

Tom Hall and the Doom Bible[edit]

The horror-tech theme was not accepted unanimously. Creative director Tom Hall had instead wanted to continue the Commander Keen series with a third trilogy, but the others felt that the cartoon style of the Keen games would not do justice to the new 3D engine.[2]:100 Conceding defeat, Hall set out to create the new game's design document, which he titled the Doom Bible, while the others were programming and creating graphics.[1][2]:107

Unlike Wolfenstein 3D, which had essentially been a plot-free shooter game, Hall wanted Doom to have an elaborate story.[2]:105 The game was to take place on an alien moon or planet called Tei Tenga, on which the UAAF (United Aerospace Armed Forces) had two military research bases. There would be four player characters with different personalities and abilities: Lorelei Chen, John "Petro" Pietrovich, Dimitri Paramo, and Thi Barrett (a fifth detailed character, Buddy Dacote, would disappear during the game's introduction). The game would start with creatures from Hell suddenly bursting in while the five were playing cards. There would be a total of six episodes, with story lines involving travel to Hell and back through the gates which the hellspawn used, and the destruction of Tei Tenga, for which the players would be sent to jail.

Some concepts from the Doom Bible, though discarded for Doom, made their way into later titles: 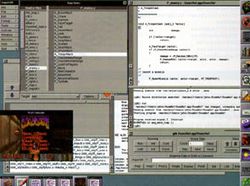 Doom was developed on NeXT workstations, under the NeXTSTEP operating system. The final game engine was programmed in C, and the editing tools were written in Objective-C. The engine was first compiled with Intel's C compiler for MS-DOS, but later Watcom's compiler was used.[3]

The bulk of the engine was programmed by John Carmack. John Romero implemented code for saving and loading games, as well as interactive features such as flickering lights, doors, rising stairs, and crushing ceilings. Dave D. Taylor was hired as a "spackle coder", adding such things as the status bar, sound library integration, the automap, level transitions, cheat codes, and the network chat system.[2]:122 The sound library, DMX, was an external piece of software created by Paul Radek, and hence was not included in the 1997 release of the Doom source code.

The editing tools used to build the game included scripts to generate source code for monsters from definition tables, a tool to piece together WAD files from data lumps, the DoomBSP map compiler by John Carmack, and DoomEd, the level editor.[2]:107,115 DoomEd's structure and basic functionality, such as drawing lines and reading sector information, was implemented by Carmack; Romero added texture viewers and dialogs.[1][3] Among these utilities, only DoomBSP had been released to the public, until the inclusion of DoomEd in the 2015 Doom source data release.

The Doom Bible contained detailed descriptions of scenarios that were to appear in the game. Tom Hall studied real military bases to create realistic locations, such as "Recreation and Training Center" and "Supply Depot Two". He designed several levels, but as they were constructed and placed in the game, the others found them banal and uninspiring.[2]:108 Hall's levels were mostly flat and square, like Wolfenstein 3D, and decorated with real-life wallpapers, floor tiles and office equipment.[1] To better show off the game engine's capabilities, John Romero instead began creating levels that were more abstract.[2]:107 The team settled on Romero's less realistic but more vivid style, which is found throughout the game's first episode, Knee-Deep in the Dead.[2]:108,111

Romero only designed the levels for the first episode, being occupied with programming and other tasks. When Tom Hall resigned, an extra level designer was needed in order to complete the game on schedule, and Sandy Petersen was hired about 10 weeks before release.[2]:116-117 In those 10 weeks, Petersen completed all of the second and third episodes, and one level for the first episode — 19 levels in total, of which eight were overhauled versions of levels by Tom Hall. Petersen paid less attention to aesthetics than did Romero, but the others thought his levels were just as fun to play.[2]:119

Adrian Carmack and Kevin Cloud were the chief artists behind Doom.[2]:107 Additionally, Don Ivan Punchatz was hired to create the package art and logo, and his son Gregor Punchatz designed some of the monsters.

Most of the sprites were drawn by hand, but some of the characters were digitized from sculptures.[2]:110 These were the player character, the cyberdemon, and the baron of Hell, all done in clay by Adrian Carmack, and the arch-vile, the mancubus, the spider mastermind, and the revenant, created in latex and metal by Gregor Punchatz. The sculptures were photographed from four to eight different angles so that they could be rotated realistically in-game, and finally touched up, colored and animated digitally with a program created by John Carmack, the "Fuzzy Pumper Palette Shop."

The shotgun, pistol, chaingun, plasma rifle, and BFG seen in the game are based on photographs of toy weapons bought at Toys "Я" Us; the chainsaw is a McCulloch Eager Beaver, borrowed from Tom Hall's girlfriend. The hands seen holding the weapons, and the brass-knuckled fist, are Kevin Cloud's. Textures were both painted and created from scanned pictures. Among the more unusual sources, one texture was based on Adrian's snakeskin boots, and a bloody texture for the hellish levels was created from a photograph of a wound on Cloud's knee.[2]:110

For music and sound effects, id Software hired Bobby Prince, who had previously scored Wolfenstein 3D and worked on the Commander Keen games. Initially, John Romero gave him several heavy metal records and told him to create something similar for Doom.[2]:118 As the design of the game progressed, it was realized that this style would not be appropriate for all levels, so Prince also created some ambient tracks.[4] The music tracks were finally assigned to the individual levels by Romero.[4]

Several of the music tracks are covers of songs by famous heavy metal bands.[4] Although the covers were done without permission, none of the bands has attempted to bring legal action against id Software. According to Romero, Prince, who was previously a lawyer, "knew the legal amount of sampling that he could do without getting into trouble". Bobby Prince himself contests this notion, however, offering in an interview in 2017 that he thought use of some of the tracks to be unwise.[5]

In addition to the albums, several of the songs were inspired by the activities of the id Software team. Prince and John Carmack would often stay in the office at hours when no one else was around; "Deep Into The Code" (E3M3 of Doom) refers to Carmack's habit of programming for long periods without leaving the computer, oblivious to his surroundings.[4] Before sound effects had been added to the game, Romero was known for energetically supplying his own while playing, and Prince created the track "Waiting For Romero To Play" (MAP18 of Doom II) after observing the anticipation of people lining up to watch Romero in action. The final sound effects for the monsters were mixed from various animal sounds and recordings by Romero and Prince.

Some of Doom's sound effects were acquired from Sound Ideas' General series sound effects library, and are thus not exclusive to the series but have been used in many films, television episodes, and advertisements. A fairly common example is the Icon of Sin spawn shooter "swoosh" sound (DSBOSPIT). These sounds were originally recorded by Mike McDonough and were originally created for either the radio serial Bradbury 13 or the Disney cartoon The Black Cauldron.[6]

Five pre-release versions of Doom originally intended for testers and the press have afterwards been released to the public due to historical interest. None of these versions have sound or music. They include the following: