Diopatra is a single-level PWAD for Doom. It was released in 1994 by Eddie Nguyen, and is the third in a series of single-level wads, following UCA and Talpoida and preceding Sapidus. 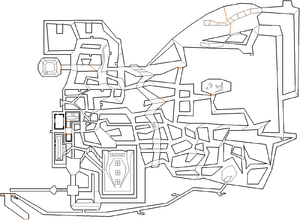 Map of Diopatra
Letters in italics refer to marked spots on the map. Sector numbers in boldface are secrets which count toward the end-of-level tally.

Various rivers of lava in the cavern (sector 45) and the red circle in the northwest (sector 38) have sector effect 11, a 20% damage floor which harms you through the radiation suit, as intended by designer Eddie Nguyen[1]. However, this also ends the level when your health drops under 11% (as on E1M8), meaning you can finish the level by jumping into the nearest patch of cavern lava you can find.