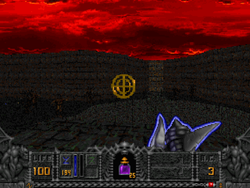 The Disc of Repulsion found in Hub 1: Bright Crucible.

The Disc of Repulsion is an artifact from Hexen, appearing as a disc made of several golden rings. When activated, it hurls nearby enemies and projectiles a safe distance away from the player, dealing a small amount of damage to any monsters that collide with a wall or other object, including another enemy. Monsters that collide with one another will start fighting as if they had been attacked.

Like other artifacts the Discs are stackable, and up to 25 may be carried at a time. Its default hotkey is 9.

In the code used to reflect missiles and re-assign ownership of seeking missiles, only certain thing types are handled, while others are neglected possibly by mistake. One such projectile that will still home in on its original target is the Dark bishop's spiraling magic attack.

In the IWADs the disc of repulsion is first encountered on these maps per skill level:

The IWADs contain the following numbers of discs of repulsion per skill level: