Distribution Center is a single-level PWAD for Doom II using the GZDoom source port. It was designed by Blake Collins (Rayzik) and uses the music track "". Distribution Center was originally created in 2016 for the Vine Mapping Contest 2016, where it went on to win first place, and was publicly released in 2017. 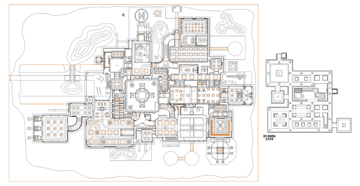 Map of Distribution Center
Letters in italics refer to marked spots on the map. Sector, thing, and linedef numbers in boldface are secrets which count toward the end-of-level tally.