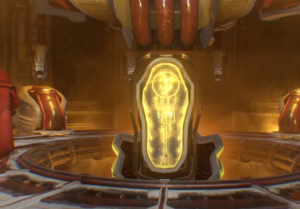 The Divinity Machine is a device that was given by the Khan Maykr to the Night Sentinels, intended to judge the strongest among them and find the "Dark One", an impure sentinel who the Khan Maykr predicted would one day cause a schism among their ranks. The device itself bears the appearance of a huge chamber with a coffin-like interface in the center where the sentinel is meant to lie down and be enclosed while the test takes place. Little is known in detail about the machine, except that it became a "holy rite" among the Night Sentinels to be tested by it as a way of "cleansing impurity" among their ranks.

During an assault on Taras Nabad by the forces of Hell, the Seraphim submitted the Doom Slayer to the rite of the Divinity Machine, which, for unknown reasons, caused him to gain unnatural strength and speed. With this strength, he was able to fight back the hordes of Hell and save Taras Nabad for the time being. The Khan Maykr later let it be known that the Slayer was a holy being, sent to bring the teachings of the Maykrs to the wicked.

Codex entries from The Ancient Gods, Part Two state that the prophecy of the "chosen one" was planted in the Khan Maykr's mind by the Dark Lord. Eager to destroy the threat posed by this "chosen one", she directed the creation of the Divinity Machine using an element of the Dark Lord sealed in the coffins of Urdak, which had been saved by The Father after he tore out the Dark Lord's life sphere. When Taras Nabad came under siege, the Dark Lord planted visions and ideas in Samur Maykr's mind that convinced him that the Khan Maykr was leading her people to ruin; unknowingly compelled by the Dark Lord's voice, Samur released an imprisoned stranger and placed him inside the machine, reversing its polarity to empower the stranger and transform them into what would become the Doom Slayer. The creation of the Slayer and his eventual destruction of the Khan Maykr was all part of a plot by the Dark Lord to destroy those who had betrayed him and sealed him away.