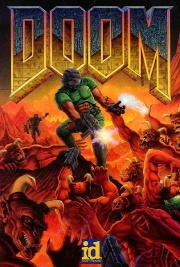 Donald Ivan Punchatz (September 8, 1936 - October 22, 2009) was a distinguished artist who drew science fiction, fantasy and various other illustrations for numerous publications including magazines like Heavy Metal, National Geographic, Playboy, and Time. In 1993 id Software hired him to create the Doom package art and logo. The result was named the second best game box art of all time by GameSpy. [1]

When id started looking for a professional to build the rest of the Doom & Doom II character models Don recommended them to hire his son Gregor Punchatz to do the job, which they did.