(Redirected from Doom, The Boardgame) 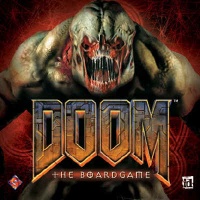 Cover for Doom: The Boardgame 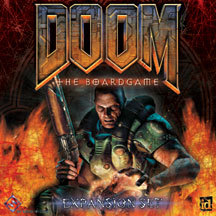 Doom: The Boardgame is an adventure board game for two to four players set in the Doom universe. It was designed by Kevin Wilson and published by Fantasy Flight Games in 2004. It clearly resembles Doom 3 more than it does the classic series, and is also somewhat similar to the classic Space Hulk board game.

One expansion has been released in 2005, called Doom: The Boardgame Expansion Set, which adds difficulty levels to the game, new game pieces and updates to some of the original rules. Fantasy Flight Games subsequently revised the Doom game to create another large board game called Descent: Journeys in the Dark. After the release of Descent, Fantasy Flight ceased production of the Doom game. 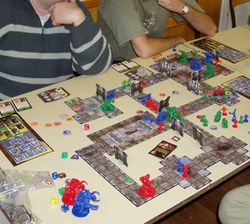 The game being played

Players in Doom: The Boardgame are on one of two teams: the Invaders and the Marines. All of the Invader pieces are controlled by one player, and the rest of the players each control one marine piece. Before each game begins, the players must choose a scenario to play in. A campaign consisting of five scenarios is included with the game, each of the scenarios is named after the episodes from The Ultimate Doom (Knee-Deep in the Dead, The Shores of Hell, etc.) and five more included in the Expansion Set as well as an extra scenario not part of the campaign available for download at fantasyflightgames.com, and many more have been created using freeware scenario editors. The scenarios can be played separately, or consecutively as a campaign where Marine players can keep their weapons and stats for the next map.

For their turn, each Marine player gets to choose an action, either advance 4 spaces and shoot once, or stay put but shoot twice, or advance 8 spaces but not shoot, or an execution of a special command combined with either advancing 4 spaces or shooting once. On the Invader player's turn the Invaders can move several spaces according to their movement rate and make one attack.

As the Marines explore the level, they discover event markers such as computers or corpses of other marines that trigger actions and events such as providing the Marine with a keycard. The Invader player, on top of moving the Invaders along the board, gets to play the cards from his hand to create traps and surprises for the Marines, such as spawning more Invaders or upgrading Invader pieces.

A common opinion is that the game is biased in favor of the Invaders - especially with four players. The designer of the game, Kevin Wilson, claims that he can win equally well no matter which team he is playing [1].

Like many board games, it is common to develop house rules (called "mods" to fit the video game theme) to balance the game to players' liking. The first (and only) official "mod" was the difficulty levels, also named after classic Doom skill levels, available for download at the game's website.