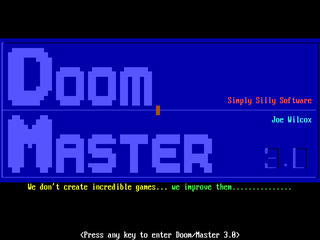 Doom/Master is a frontend for Doom (officially supporting registered versions 1.2 through 1.6 as of the final v3.0 release) developed by Simply Silly Software programmer Joe Wilcox (Sillysoft) in 1994. It is particularly notable for becoming a basis for the D! frontend, an initially identical product which was licensed by WizardWorks for inclusion with most versions of the D!ZONE commercial compilation series. As Doom/Master, the frontend was available as fully functional shareware with a requested registration price of US $5.00. Later versions published under the D! name increased in price, removed full player database support from the shareware version, and added features such as Doom II, Heretic, and Hexen support. 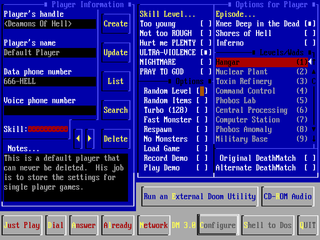 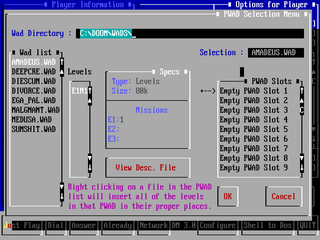 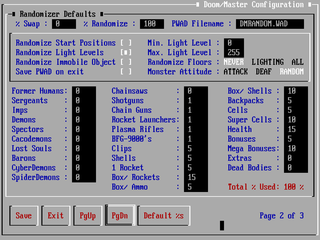 When the MSCDEX driver is installed and configured, Doom/Master can play CD audio during game play. A full CD audio player interface is included.

Virtually all command-line and configuration settings that were supported as of Doom v1.6 can be configured in the frontend and will be remembered between sessions. This includes options such as turbo speed, fast monsters, monster respawning, no monsters, loading saved games, playing and recording demos, and more. Single-player games can be started immediately, or the frontend can use any compatible network component driver, including its own DMSERDRV as well as id Software's SERSETUP, to negotiate a connection first.

Doom/Master includes its own external driver for the Doom networking component called DMSERDRV, which allows negotiating dial-up and null modem connections at speeds of 14.4 kHz and greater. It can also hold the connection across multiple games, and can detect busy signals on the line, automatically redialing until a connection is obtained. A second external utility, DMSERCFG, is provided which helps configure dial-up modem connection strings and options.

The Doom/Master interface is centered around its player database, which allows tracking names, phone numbers, and other information. One default entry is used for the local player, and every player in the database can have their own options configured. The player database was new to version 3.0 of the frontend, having evolved from the earlier phonebook of versions 2.1 and lower.

Doom/Master contains a level extractor which can select levels from any number of PWADs from the user's configured WAD directory and recombine them in a specified order into a single temporary file for play. It can handle other resources from the PWAD files properly as well, such as sounds, skies, and wall textures. Doom/Master can view the description files for PWADs from inside the frontend. Paths can also be configured to external graphics and audio WADs which Doom/Master will load every time Doom is launched, in addition to any of the levels that were added.

The Doom/Master randomizer can swap or completely change actors, lights, and floors in levels to the user's detailed specifications, including configurable percentages for every object type to place in the map. Special support is provided for randomizing deathmatch starts to enable more varied multiplayer experiences. The randomizer seed can be specified so that every player in a network game will generate the same PWAD. Randomized PWADs created this way can be permanently saved in case they prove to be fun to play.

The Doom/Master frontend can shell out to DOS (reducing itself to a 2KB memory footprint while staying resident) to allow custom commands to be run, and can also launch up to ten external Doom utilities which are fully configurable by the end user.